Travelodge Canada is trying to find out which OHL and WHL team has the greatest fans!

Every week starting November 18th, CHL teams and their biggest fans have been facing off in weekly battles where the most votes win.  The Tigers had a great Round Robin battle with five teams in the Central Division.  The Tigers beat the Red Deer Rebels, Edmonton Oil Kings, Kootenay Ice, Calgary Hitmen and the Lethbridge Hurricanes to earn a first place finish in the division.

The first week of playoffs saw the Tigers facing off against the second place team, the Calgary Hitmen.  They defeated the Hitmen by just over 30 votes to put your Tigers into the semi-finals.  Tigers fans then took on the Edmonton Oil Kings in the semi-finals and defeated them by over 100 votes!

This week the Tigers will face off against the Vancouver Giants in the Travelodge “Fan Faceoff” FINALS.  The Giants defeated the Victoria Royals in the first week of playoffs and then knocked off the Brandon Wheat Kings in the semi-finals.

You can participate in the Fan Faceoff every day to support your Medicine Hat Tigers!

There are also perks to voting daily!  Each week Travelodge awards a $250 Travelodge Gift Card to a participating fan in both the WHL and OHL.  The Tigers have already had one lucky fan win one of the Gift Cards!  There is also a Team Grand Prize in which the winning team from the Fan Faceoff will recieve a team party courtesy of Travelodge.  Lastly, one fan from each OHL and WHL Fan Faceoff Champion team will win a MasterCard Memorial Cup trip for four including airfare, accommodations and spending money!  So if the Medicine Hat Tigers can become the Fan Faceoff Champions this year, one of our lucky fans will be awarded a trip to the Memorial Cup!

Click HERE to vote daily in the Travelodge Fan Faceoff! 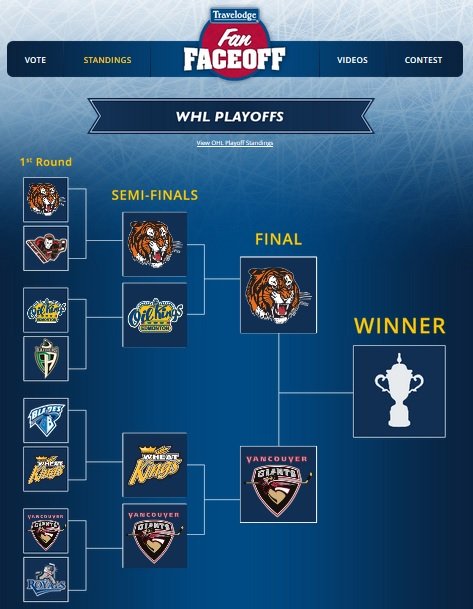