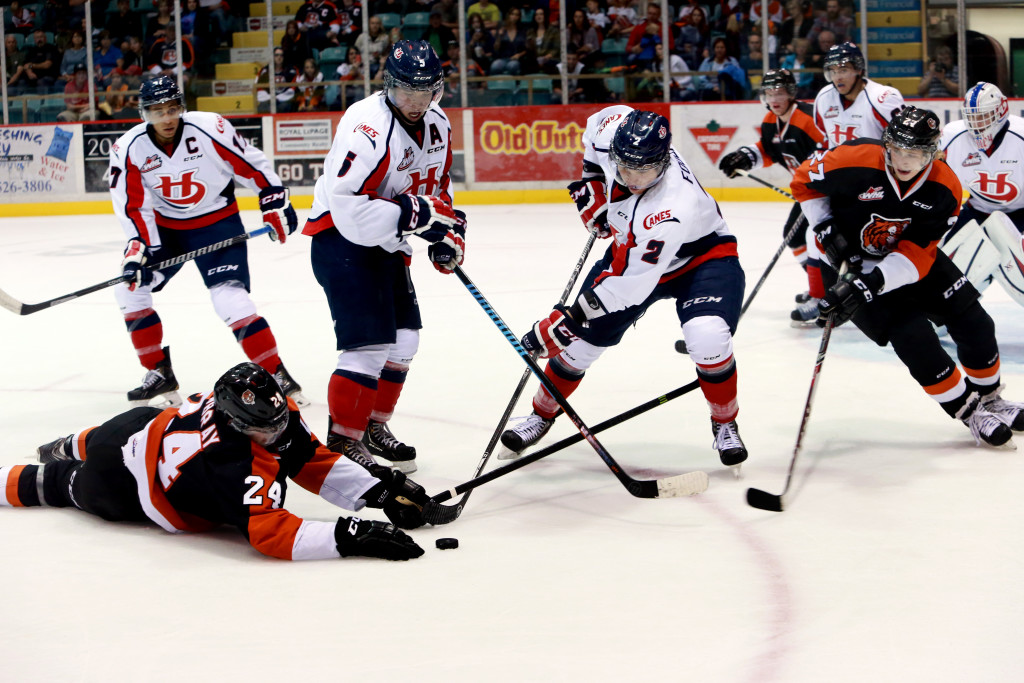 Medicine Hat, AB — The Medicine Hat Tigers got their gifts from Santa and were back in game action on Saturday night for the first time in 10 days. The Tabbies faced off against Highway 3 rivals the Lethbridge Hurricanes, who had won 2 in a row prior to tonight.

The opening frame started quickly with a goal by Anthony Ast just a minute and 20 seconds in, Ast was in the right place at the right time and buried a puck that got past goaltender Stuart Skinner. Marek Langhamer got the start for the Tigers on this night and he was his normal self in the opening frame, making some great stops until Miles Warkentine netted his first goal of the season just past the midway point to tie the game at 1. A minute later the Tigers would answer as Tommy Vannelli wished it was baseball season as he batted in his 12th of the season to give the orange and black a 2-1 lead after 20 minutes of play.

The first period started with a goal, while the middle frame kicked off with a fight as Tyler Lewington and Carter Folk exchanged what they got for Christmas in a quick fight just 30 seconds in. The fight would seem to spark the Hurricanes only as they answered for 3 goals in the period. Captain Jamal Watson was left unattended in front of the net and buried to tie the game at 2, followed by Giorgio Estephan and a power play marker by 20 year old Zane Jones. The Hurricanes took a 4-2 lead into the break.

The final period marked more scoring on this night as the two teams combined for 5 goals. The Tigers, just like the first period struck early with Alex Mowbray finding the back of the net on a wrist shot from the side wall, his 5th of the season. Mowbray would follow that shot with another goal just 3 minutes later off an offensive zone faceoff to tie the game at 4. The Tigers penalty kill has struggled down the stretch heading into the holiday break and once again it would let them down as the Hurricanes would strike on another man advantage to take the lead 5-4. But, Kyle Becker would tie it on a Tigers power play late in the game to knot the game at 5’s.

A strong game by both teams was then made exciting for one team, as the Hurricanes would take a late 3rd period lead as Jones would fire his 2nd of the game on a wrist shot that found the shortside hole over Langhamer’s shoulder. The Tigers would press for the equalizer but were unable to capitalize falling 6-5.

The Tigers are back in action tomorrow night to finish the home and home with the Hurricanes for a 6:00pm puck drop! Call 403-527-8406 for tickets!