TIGERS LOSE A CLOSE ONE 2-1 TO OIL KINGS 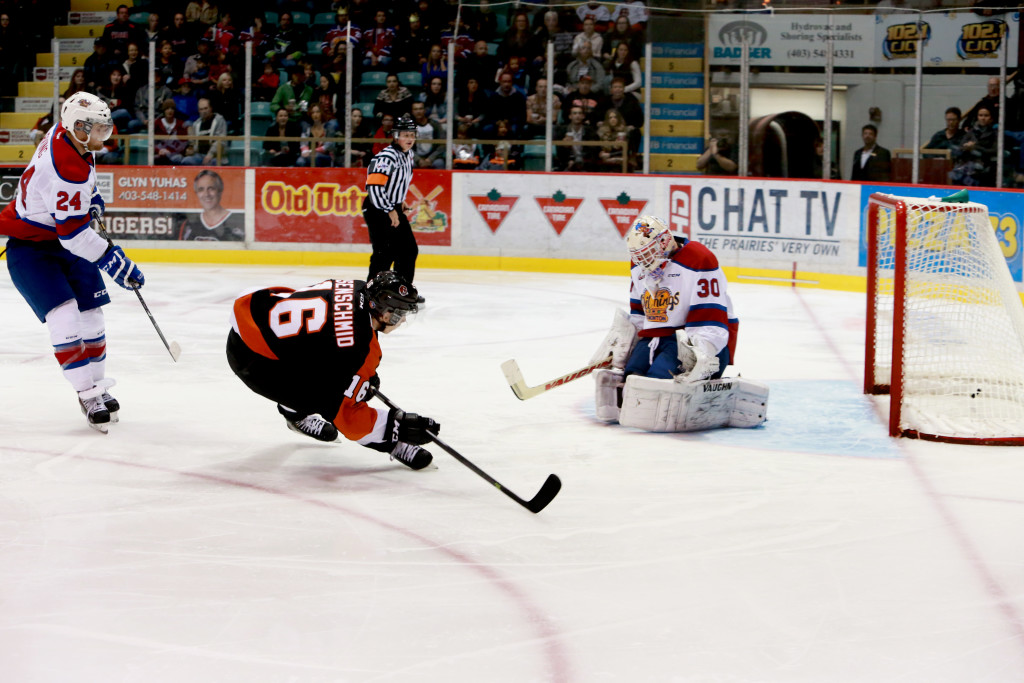 Medicine Hat, AB — The Medicine Hat Tigers came into Saturday night’s game versus the Oil Kings looking for revenge from the playoff defeat just 5 months ago. The Oil Kings put forth a different lineup than what the Tigers saw last April as many NHL drafted players have made the jump to the pros. On this night however, it was goaltender’s Tristan Jarry and Marek Langhamer who would steal the show.

The first period was a dominating period for the Tigers as it saw them put 15 shots on Jarry. The most notable save by the 19 year old Pittsburgh Penguins draft pick was a flurry of stops on a Tigers power play where he stoned Trevor Cox, Matt Bradley and Cole Sanford in succession. Marek Langhamer was also up to the task, he made 10 saves in the period, with his best being a glove save on a streaking Brandon Ralph to keep the game scoreless through 20 minutes.

The Tigers would strike first in the second stanza as smooth skating Markus Eisenschmid stole the puck at the Oil Kings blueline and used his speed to out skate Edmonton’s Aaron Irving. Eisenschmid would put a backhand five hole on Jarry to put the Tigers up 1-0 on the shorthanded, unassisted marker. The Tigers would continue to control the play over the Oil Kings, outshooting them 11-8 and 26-18 overall after 2 periods.

The final frame saw a back and forth affair as both teams tried to get the next goal. Once again the goaltenders stole the show as Jarry stood on his head throughout 5 Tigers power plays in the period. While Langhamer stood his ground for the Tigers to hold onto a 1-0 lead. With 12 minutes remaining in the period, the Tigers lead would vanish as Blake Orban slapped home his 1st of the season after Cole Benson won an offensive zone faceoff. Then, with under 2 minutes left in the game, Ben Carroll wristed a shot past a screened Langhamer to give the Oil Kings the lead. Brandon Baddock would take a late penalty, but the Tigers power play could not capitalize, handing the Tigers their first loss of the season.

Three Stars of the Game

The Tigers are back in action on Tuesday night as they travel to Rexall Place to take on these same Oil Kings in the back half of a home and home. You can catch the action on CHAT 94.5 with Bob Ridley starting at 6:45pm!

The Tigers next home game is Friday October 3rd as the Saskatoon Blades come to town. Gametime is 7:30pm here at the Arena. Call 403-527-8406 to get your tickets today!