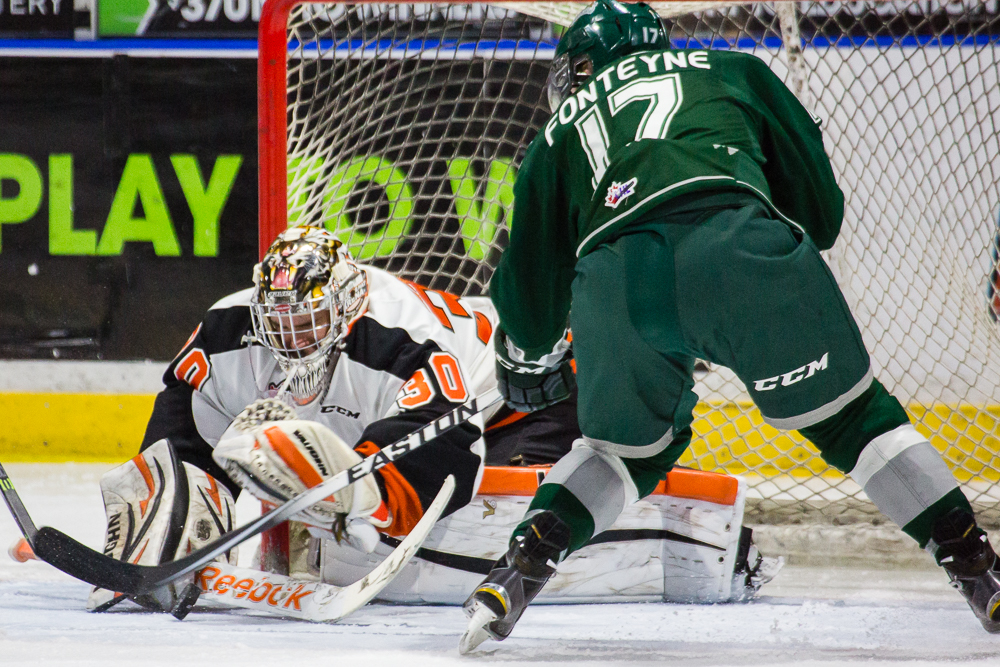 Medicine Hat, AB — The Medicine Hat Tigers made the long bus ride Wednesday night to open their 4 game in 5 day road trip. Their first stop was Everett to take on the 1st place Silvertips, a stingy defensive team, ranking 2nd in goals against this season. The Tigers, with help by Marek Langahamer and Trevor Cox would pick up their 4th straight victory tonight 5-2.

The Tigers looked to get off to a quick start as the visiting team of Comcast Arena and they would take advantage of a sloppy power play early in the game as Cole Sanford and Trevor Cox played a perfect 2 on 1 to put the orange and black up early. Special teams were key for the visitors in the period as the Tigers put one up on the power play this time, Cox tipped home his 6th of the season off a Kyle Becker point shot to give the Tigers a 2-0 lead after 20 minutes.

The middle frame became the Nikita Scherbak show for the Silvertips as he took over the game with end to end rushes and flashed his brilliance that got him selected in the NHL Draft by the Montreal Canadiens. Scherbak would setup two power play goals in the frame for the ‘Tips and increased his team leading point total.

Not to be outdone was Tigers netminder Marek Langhamer, who had a game himself, stopping 20 of 22 shots through 2 periods, some of the amazing variety as he kept the game close for the Tigers heading into the third.

The Tigers in the second 20 minutes also found the scoresheet thanks to Chad Labelle and Trevor Cox. Labelle took a “home team” bounce off a Tyler Lewington dump in to capitalize on the chance, potting his second goal of the season. Meanwhile, Cox took a Tommy Vannelli pass and roofed a slap shot past ‘Tips starter Austin Lotz.

The final frame was a end to end battle as the Tigers held onto the 2 goal lead. The visitors would take a tripping penalty late and held the ‘Tips to just 3 shots on the man advantage. Everett would pull Lotz with 5 minutes remaining the period, the Tigers came close numerous times to put the game away in the empty cage but were unsuccessful until the dying seconds when Cox would complete his second hat trick of the season and 4th point of the game.

The Tigers continue their road trip tomorrow night with a date in Seattle against the Thunderbirds. Puck drop is 8:05pm MT, you can catch all the action with Bob Ridley on CHAT 94.5 or on the Tigers twitter!