TIGERS RALLY FROM EARLY DELAY TO DOWN BLAZERS 7-3 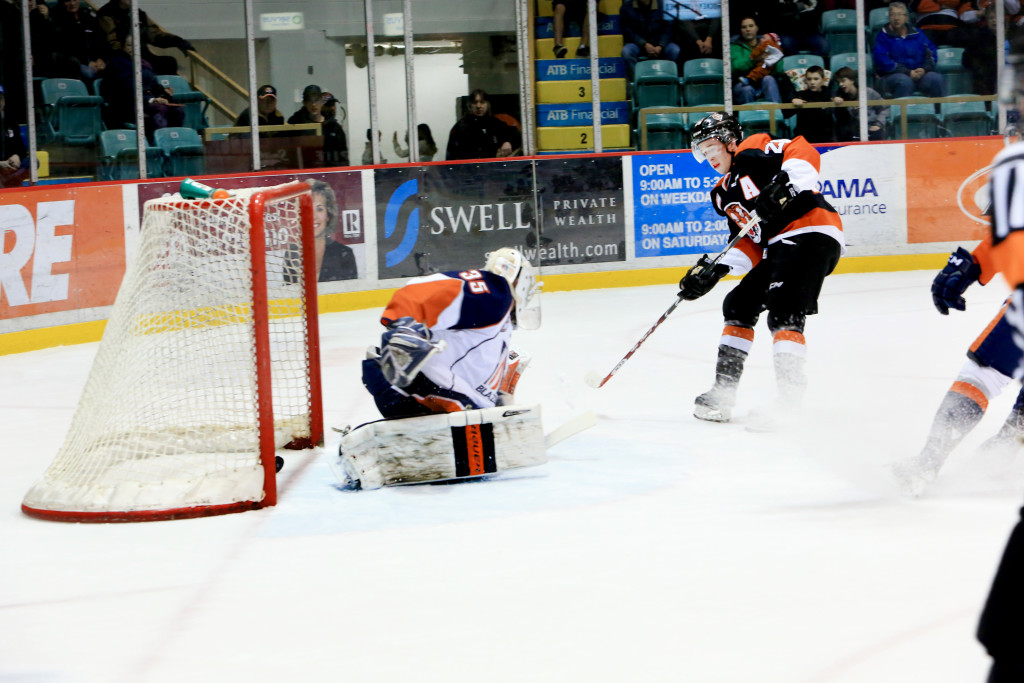 Medicine Hat, AB — In one of the weirdest starts of the season, the Medicine Hat Tigers pushed through an hour delay to the game by beating the Kamloops Blazers 7-3 Wednesday night.

The game started with an hour delay just over 2 minutes into the game, Trevor Cox was chasing a loose puck into the corner and was hit by a Blazer defender, Cox went through the gate which is situated in the corner, breaking a piece of the metal clamp to hold it in place. Initially a quick fix was in order, but it proved no match to a body check as one of the Blazer players was told to ram it with his shoulder. Another delay followed as the wait was on for a welder to come and fix the broken piece of metal. An hour passed before the puck was dropped again.

The remainder of the opening frame was a lackluster period, not much action for the sold out crowd to get excited about. Marek Langhamer was his solid self, stopping all 15 shots in the period, some of the glorious kind. Matt Staples had the save of the game as he dove across the goal line to rob the Blazers of their first goal as the puck got past Langhamer. The Tigers would strike first however as it was red hot Cole Sanford shorthanded to give the home side a 1-0 lead.

The middle period was similar to the last Tigers home game, a lot of scoring by both teams and in total they would bulge the twine 5 times. The Blazers would start early as captain Matt Needham netted his 11th of the season just over a minute in to tie the game. The Tigers would answer 5 minutes later when Tommy Vannelli picked the top corner and sent the water bottle flying for his 11th on the campaign. Moments later the visitors would answer back after a Tigers giveaway.

The Blazers would take a lead with under 5 minutes left in the period when Needham struck for his second of the game, but the lead only lasted two minutes as the home side struck on the power play when Steven Owre tipped home a point shot.

Heading into the final frame the two teams were tied up at 3, however the Tigers wanted to put the game away on this night as they found the net 4 times in the period. Sanford kicked it off 4 minutes in as wristed a shot on the power play, a PP that was 2 for 3 on the night. Cox would pot his 12th of the season 4 minutes later to give the home team a 2 goal lead, a lead they would not relenquish. The Blazers looked tired in the final 20 minutes, having been on their final game of a 6 game Alberta road trip. Tigers would strike two more times, Sanford with the hat trick goal and Matt Bradley added his 8th bar down to seal the deal on this night.

The Tigers are now off for the annual Holiday break lasting a full week before practice resumes. The Tigers will be in action on December 27th in Lethbridge to begin the second half of the season with a home and home with the Hurricanes.

The Tigers will be back home Sunday December 28th against those same Hurricanes for a 6:00pm puck drop!

MERRY CHRISTMAS AND HAPPY HOLIDAYS FROM EVERYONE AT THE MEDICINE HAT TIGERS!