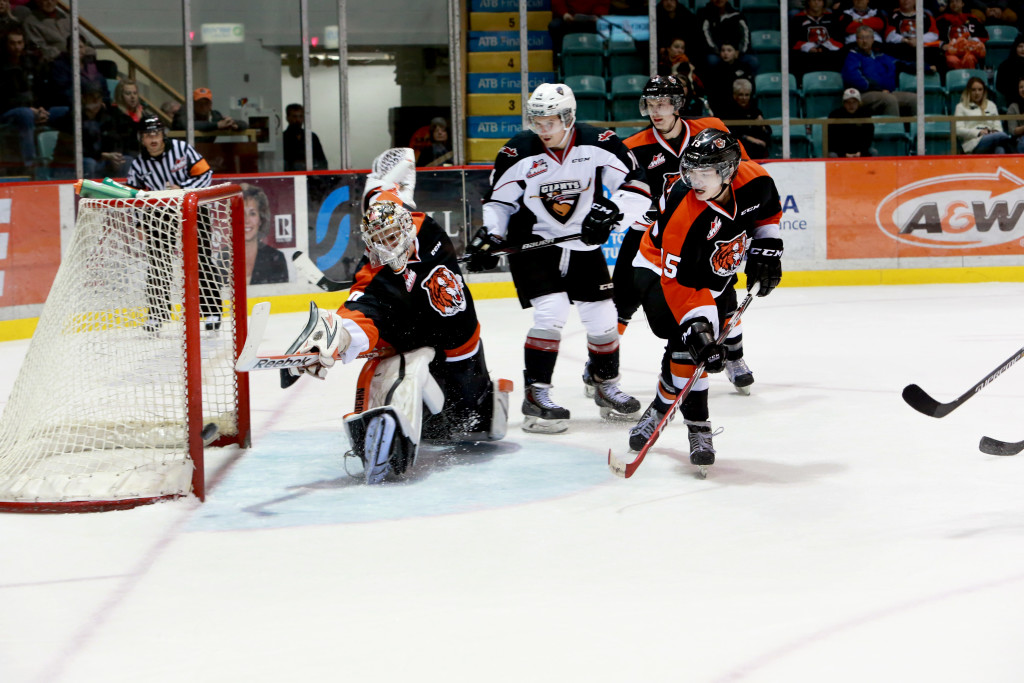 Medicine Hat, AB — The Medicine Hat Tigers and Vancouver Giants don’t meet often during the regular season, but tonight the two teams played like it was a division rivalry with the home side coming out on top 6-1.

The Tigers fans in attendance got their money’s worth as the opening period started with a bang. Tommy Vannelli would get called for roughing but that wouldn’t stop Kyle Becker who potted his 5th of the season. Becker was the leading point getter against the Giants last season with 3 points in 2 games and would add to his totals on this night. It was a special teams affair for the Tigers as Matt Bradley would rifle a shot off the cross bar and in on the power play to give the Tigers a 2-0 lead before the midway point of the period.

Mark Rassell has had numerous chances over the past 3 games but has been unable to find the back of the net since the home opener but was able to pot a spin-o-rama goal past Giants starter Payton Lee for his 2nd of the year, a rewarding gesture for the hard working rookie.

Becker would continue his dominance of the Giants as he would follow the play up once again shorthanded and fire a wrister off the post and in for his 6th on the year and 2nd of the game, Trevor Cox and Cole Sanford setup the goal, increasing their team lead in points.

Tigers fans could exhale throughout the intermission as they were treated to a dominating first period. The second brought more excitement as just 2 minutes in Blake Penner would net his 4th on the season on the power play after Tyler Lewington made a gorgeous pass cross crease, Bradley would also pick-up an assist, his 3rd point on the night.

Mason Shaw is always known to Tigers fans as a hard worker, but on this night he showed why as a Bradley wrist shot would bounce off a stick and off of Shaw’s chin and into the net, an unusual goal for the 16 year old, but it gave the Tigers a 6-0 lead. Moments after the goal, Giants forward Jackson Houck would level a huge hit in the middle of the ice on Alex Mowbray, but Matt Staples would step in and take him on in a quick fight, an even battle between the two combatants.

The final frame saw a senseless act by Giants defenceman Mason Geertsen who decided to jump Tigers forward Chad Butcher. Butcher, fresh off an injury, wanted nothing to do with the 6’4 defenceman and after the dust settled would put the Tigers on a 5 minutes power play, an opportunity which yielded lots of shots but no goals. The only goal of the period would be by the visiting team, Matt Bellerive wristed home a shot that just slipped through the arm of Marek Langhamer to break his shut out bid and end the game with a 6-1 final.

The Tigers next home game is Friday and Saturday as the Tigers go back to back this weekend! Friday night’s game is against the Red Deer Rebels and Saturday will be against the defending Memorial Cup Champions Edmonton Oil Kings. Both games are a 7:30pm start at The Arena. Call the Tigers Box Office at 403-527-8406 for tickets!