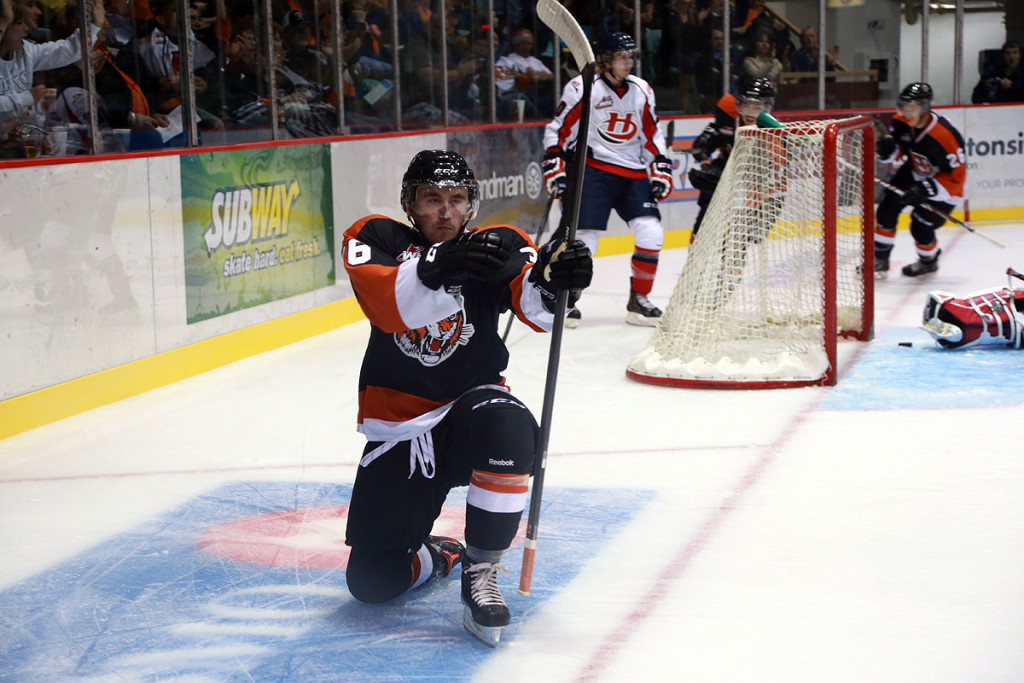 Medicine Hat, AB — The Medicine Hat Tigers came into Sunday night’s game looking for revenge on the visiting Lethbridge Hurricanes after a 6-5 loss Saturday. A sold out Medicine Hat Arena was buzzing as they were able to see a bit of everything in this game.

The opening frame was a chess match but was free flowing as the game didn’t have it’s first whistle until the seven minute mark of the period. It was also a battle of the backup goaltenders in Tigers Nick Schneider and Hurricanes Zac Robidoux. The visitors would open the scoring just past the midway point of the period. Zane Jones roofed a wrist shot past Schneider’s glove, his third goal against the Tigers over the past 2 games. Before the period ended, Trevor Cox would answer which kick started another huge night for #36 white.

The second period opened with both teams trading goals once again, a trend continuing from last night’s tilt which the lead was flipped multiple times. First it was Kyle Becker for the Tigers who potted his 8th of the season, that was answered just a minute later when Giorgio Estephan slipped one five hole on Schneider for his 4th of the year.

Past the midway point of the middle frame, the Hurricanes got themselves into penalty trouble, taking four consecutive penalties, which gave the Tigers a 5 on 3 at one point. Trevor Cox would fire up his night on the scoresheet, recording points on the next 4 Tigers goals, including 3 assists, 2 on the power play. At the end of the period, the Tigers had a commanding 5-2 lead and outshot Lethbridge 20-3 and 37-12 overall.

What can be said of the third period if you are a hockey fan? It had a little bit of everything, from fights to great tic-tac-toe goals, the final 20 minutes had The Arena jumping. It all started just 21 seconds into the frame as Cole Sanford finished off a great passing play from Cox and Kyle Becker to put the Tabbies up 6-2 early. Just over a minute later, Sanford struck again, sending the Tigers faithful into a frenzy and increasing the lead by 5.

The scoring would stop and out came the fists, which doesn’t bode well for their chances on getting on Santa’s nice list for next year! Tyler Lewington is no stranger to mixing it up and threw down with fellow 20 year old, Zane Jones. The Hurricanes would score moments later to make things interesting at 7-4. But, just before the media timeout of the period, an Alex Mowbray hit after the whistle sparked a melee which was capped off by a Nick Schneider and Zac Robidoux goalie fight at center ice. It marked the 1st ever scrap for the 17 year old goaltender. The fight brought the fans to their feet at sight of the rare event.

In the end, the Tigers would add one more goal before the final buzzer sounded, Steven Owre capped off a spectacular game by the Tigers squad who never let go of the gas pedal on this night.

The Tigers are back in action on Tuesday night when the Kootenay Ice pay a visit to the ‘Hat. The Ice will be without Sam Reinhart but have won 5 straight heading into the game. Call 403-527-8406 to get your tickets!!