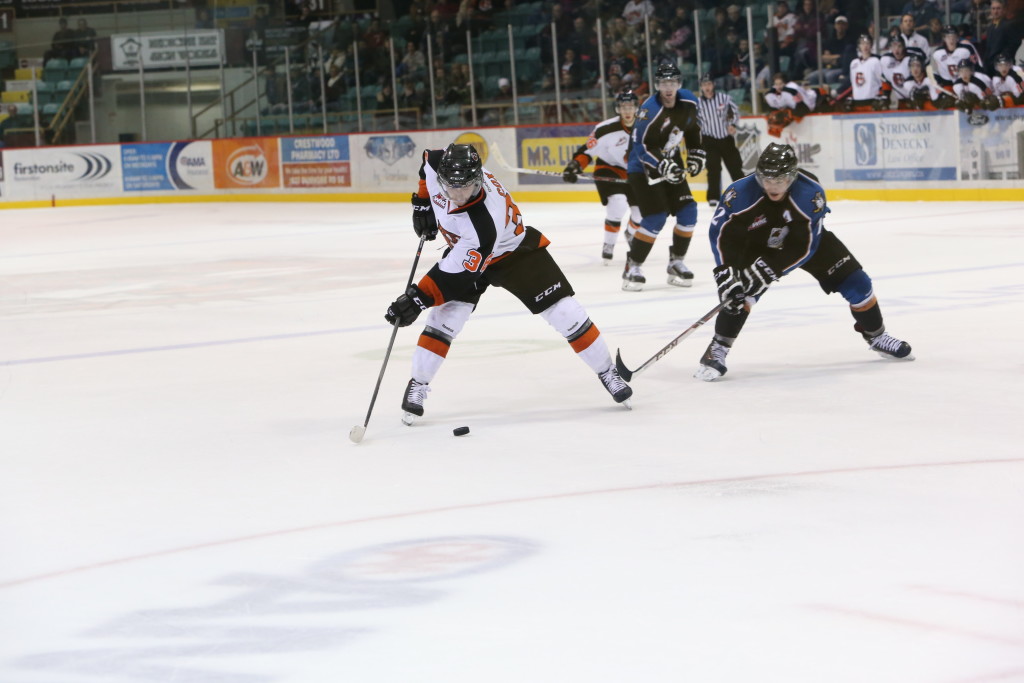 Medicine Hat, AB — The Medicine Hat Tigers have not had success in Cranbrook over the past three seasons, losers of six straight at Western Financial Place, the orange and black looked to right the ship on the road Wednesday night. Led by the attack of Trevor Cox, the Tigers picked up a 7-3 victory.

The first period was a tightly played chess match to start as the Tigers could not register a shot on goal until the 8 minute mark of the frame. The Ice were strong in their own end, keeping the Tigers to the outside as the two teams felt each other out in their first meeting of the season.

The period kicked off with the Tigers getting on the board first as Tommy Vannelli scored his 9th of the season as assist machine Trevor Cox found a streaking Vannelli and his wrist shot was too much for Wyatt Hoflin, the Ice starting goaltender. Before the period expired, Blake Penner would pot his 3rd of the season for the Tigers on the power play as he took a feed from rookie Mason Shaw and threw it on net past Hoflin.

The Ice came out in the middle frame flat as the Trevor Cox would get the monkey off his back so to speak when he took a pass from Vannelli and broke in on a breakaway just 41 seconds into the period to give the visitors a 3-0 lead. Chad Labelle, who had 2 assists last night, netted his first goal of the season at the midway point of the period. Labelle rifled a puck on net and caught Hoflin off guard. The Labelle goal would spend the end of the night for Hoflin as he was pulled in favor for Keelan Williams. Williams was no match either for Cox, as he would bury his second of the game with only 30 seconds left in the frame and the Tigers went into the break with a 5-0 lead.

Five goals were scored in the final period as it was a push back frame for the Ice in order to keep this one from getting out of hand. Jaedon Deschaneau would get the Ice on the board first with a power play marker as he found the top shelf from the high slot. But just 52 seconds later Mason Shaw wristed home a shot past Williams top shelf. The goal gave the Tigers rookie his second of the season. Tim Bozon, playing in his 6th game of the season, would answer for the Ice as he finished off a passing play from Deschaneau and Sam Reinhart. Not to be outdone was Cox who answered just 11 seconds later with his hat trick goal and 4th point of the game to put the game on Ice 7-3.

The Tigers are back in action on Friday night as they hit the road again to face the Red Deer Rebels. The next home game is Saturday when Sam Reinhart and the Ice come to Medicine Hat looking to avenge tonight’s loss. Call the Tigers Box Office at 403-527-8406 to get your tickets!