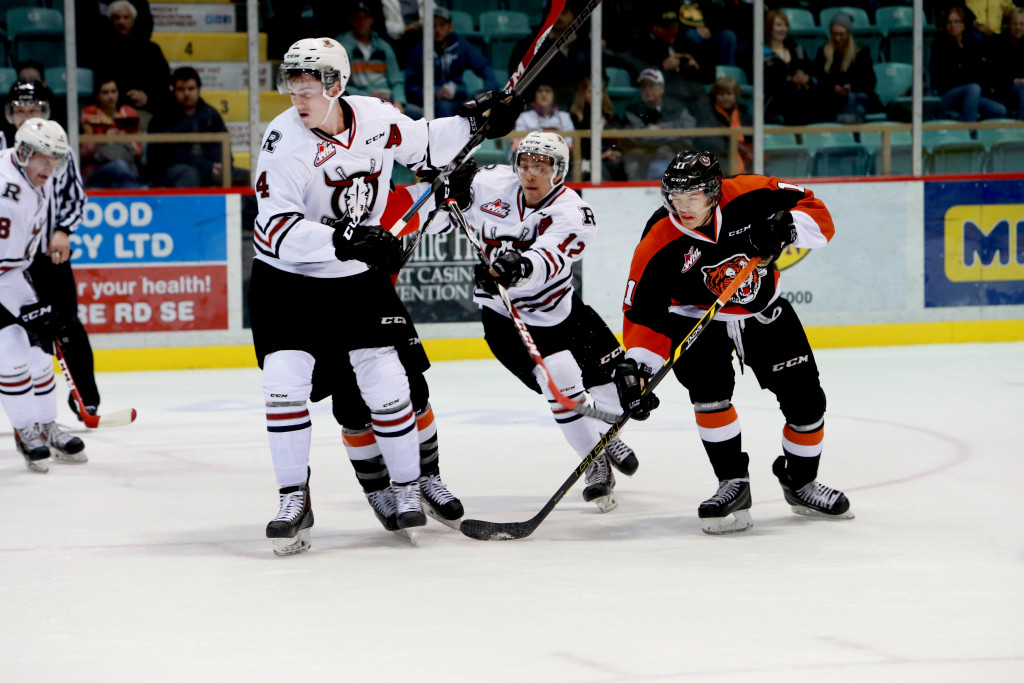 Medicine Hat, AB — The Medicine Hat Tigers continued their busy week with a trip to Red Deer for the final time this season. The Tigers last trip to the Centrium was a 5-3 defeat which snapped a three game winning streak. On this night however, the Rebels would be victorious again and snap the Tigers mini two game streak.

The first period started with a bang for the visting Tigers as Cole Sanford found the scoresheet just 25 seconds in. Trevor Cox and Steven Owre setup the opening goal as fans were just making their way into their seats. Fists would fly as two fights would break out at different times in the frame, Blake Penner took exception to a Conner Bleackley hit and challenged the NHL 1st rounder just 30 seconds after the Sanford goal. Matt Staples wanted to get on the action and dropped his mitts with Adam Musil, a quick bout, but nonetheless five minutes each.

Chad Labelle would take a hooking penalty early into the second period setting up a Rebels power play which was ranked 12th in the league heading into tonight. Musil would make the Tigers pay as he found the back of the net past Langhamer to tie the game at 1. The second period was owned by the home team as the Rebels came in waves, pressuring the Tigers at every chance they could. As a result of some aggressive forechecking, Matt Bradley was on the receiving end of a large bodycheck in the middle of the ice to give the crowd a rise. The Tigers would end the period tied but were outshot 14-10.

A late penalty at the end of the period gave the Rebels a power play to start the third and Scott Feser made the Tigers pay as he showed off his cannon of a shot on a one-timer to give Red Deer the 2-1 lead. The Tigers would switch the momentum as the line of Matt Bradley, Mason Shaw and Blake Penner turned it up a notch, pinning the Rebels in their end numerous times. Bradley would tie the game thanks to some hard work by his linemates as he wristed a puck shortside past goalie Rylan Toth.

The Rebels were on their heels for majority of the period as the Tigers pressed, but Evan Polei would break the tie with only 4 minutes left in the game as he drove the net hard and flicked a shot up and over Langhamer’s shoulder. The Rebels would add an empty netter as the Tigers pulled the goalie in an attempt to tie the game.

The Tigers will head home to take on the Kootenay Ice tomorrow night as Tigers fans will get their first look at Sam Reinhart. Call the Tigers box office at 403-527-8406 to get your tickets as limited pairs are available.