Medicine Hat, AB – The Tigers avenged an early season loss to the Lethbridge Hurricanes with a 7-0 shutout win to the delight of the fans at The Arena on Wednesday night.

The win was the Tigers third in a row and improves their record to 9-5-0-0. 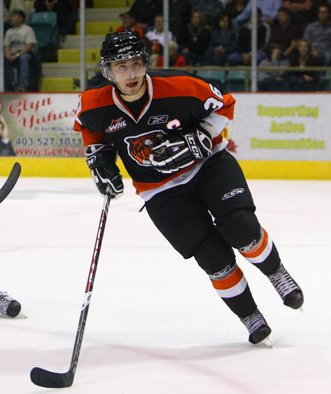 The Tigers, who got goals from six different players, held Lethbridge to just 17 shots on the night.  Goaltender Tyler Bunz (5-4-0-0) made timely saves for his third career shutout.

Forward Ryan Harrison gave the Tigers a 1-0 lead on the lone goal of the 1st period.  Three more goals in the 2nd period by Hunter Shinkaruk, Wacey Hamilton and  Emerson Etem extended the Tigers lead to 4-0 after 40 minutes.

For Emerson Etem, it was his fourth goal in three games and 10th of the season.

In the final frame, the Tigers managed three more as Kale Kessy, Tyler Pitlick and Wacey Hamilton, with his second of the night, all scored.

On the night, the Tigers were 1 for 6 on the power play, while holding the Hurricanes scoreless on four man advantages.

The Tigers will go for four in a row this coming Saturday night against the Saskatoon Blades. Game time is 7:30 PM and can be heard live on CHAT 94.5 FM at tigershockey.com or watched via webcast at livestream.whl.ca.