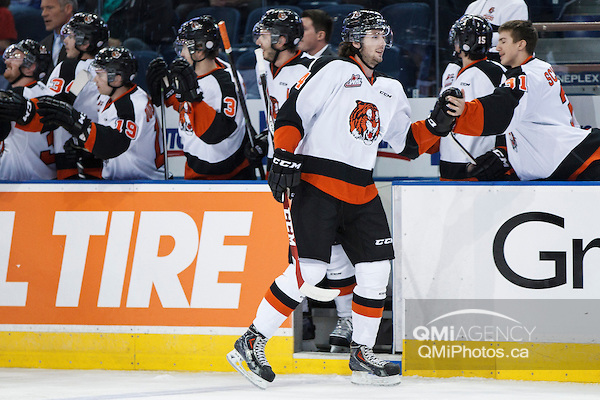 Medicine Hat, AB — The Tigers continued their United States road trip on Saturday night against the Seattle Thunderbirds in Kent, Washington after defeating the Everett Silvertips just 24 hours prior. It was a battle of the back up goaltenders as both 20 year old netminders would take the night off and it was Nick Schneider‘s turn to break his mini 2 game losing streak.

The first period had a bit of everything as the Tigers saw former defenceman Scott Allan in a blue uniform for the first time this season since his trade. More importantly was the play of the “4th line”, Zach Fischer, Matt Staples and Mark Rassell provided the early spark the Tigers needed in hostile territory. Seven minutes into the game, Rassell would find a loose puck off the wall and fire home his 3rd of the season, both his linemates would pick up an assist on the play.

Seattle would tie the game on a power play as 20 year old Evan Wardley potted home a rebound in tight. The Tigers would capitalize on a power play of their own after Seattle took a too many men penalty. Steven Owre was on the receiving end of a beautiful Trevor Cox pass from behind the net. Before the period would end, Zach Fischer would pot his 2nd of the season as Matt Staples picked off a pass at the blue and the rookie in on a short breakaway give the orange and black a 3-1 lead after 20 minutes.

The middle frame was a push back period by the home side, they peppered Schneider with 14 shots but could not find the back of the net. The period was full of back and forth play as both teams battled to get the next goal, but it was the Tigers who would get on the board before the buzzer sounded. Anthony Ast picked off a Wardley clearing attempt behind the Seattle net and came out front to jam home his 2nd of the season with just 20 seconds remaining, giving the Tigers a 4-1 lead after 40.

Third period was all Seattle as they came with wave after wave of offense. The Tigers, being the best defensive team in the WHL held the pressure off, with the help of Schneider in net. However, the Tigers penalty kill couldn’t get the job done as it saw the T-birds net 2 power play goals in the period, both by Keegan Kolesar to pull Seattle within one midway through the frame.

The Tigers scoring depth was on display on this night as David Quenneville would blast home a point shot with under 3 minutes to play in the game, restoring a much needed 2 goal lead for the Tigers. For Quenneville it was his 5th of the season.

Nick Schneider would shut the door down the stretch as Seattle would pull their goalie and play 6 on 5 for the remainder of the game. For Schneider, he picked up us 6th win on the season on a 40 save performance.

The Tigers continue their road trip tomorrow evening with a date in Portland against a former teammate in Miles Koules. Puck drop is 6:00pm MT, join Bob Ridley on CHAT 94.5 or the Tigers twitter for all the action!