TIGERS WIN A THRILLER IN OT 3-2 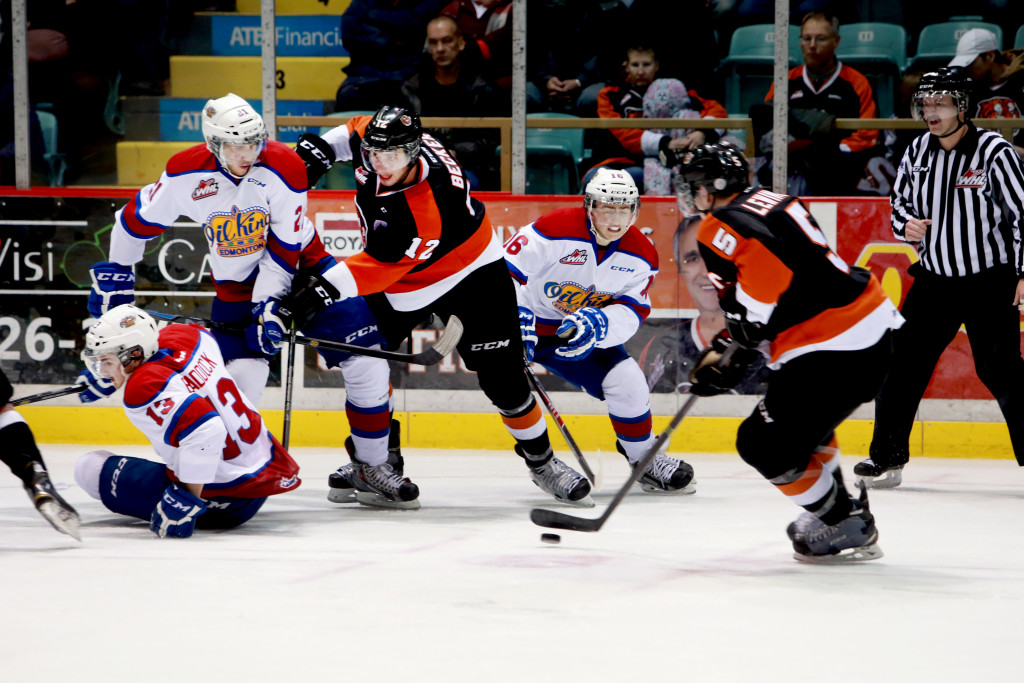 Medicine Hat, AB — This weekend is not for the faint of heart for the Tigers faithful. Friday night saw up and down action and an overtime winner and Saturday brought a little bit of the same. The Edmonton Oil Kings, fresh off a 3-0 victory against Vancouver Friday made the trip to Medicine Hat searching for the win, but it would be the Tigers who came out on top.

The Oil Kings were shorthanded on this night, sitting 7 regulars including Edgars Kulda, Cole Benson and Ben Carroll. Tigers fans showed no sympathy on this night as the home side have dressed 16 skaters multiple times over the past few weeks. Despite the short bench, the Oil Kings would jump to an early lead as at the 8:17 mark of the period Andrew Koep found the back of the net on the Kings first shot on net. At the time of the goal, the Tigers were outshooting Edmonton 13-0. A late Oil Kings power play would net them a 2-0 lead as Mads Eller potted a rebound goal past Langhamer. Edmonton had 2 goals on 6 shots in the frame.

Tigers line of Chad Labelle, Anthony Ast and Alex Mowbray had a great game and a great period, creating chances and shots on Tristan Jarry but unfortunately could not find the back of the net. The Tigers ice was tilted towards the Oil Kings end all night and the second period was no exception. Tommy Vannelli would get the Tigers on the board first with a snipe top shelf to finally get one past Jarry, for Vannelli it was his 10th of the season, the first double digit goal scorer on the Tigers blueline. 29 seconds later Tyler Lewington took a feed from Mason Shaw and rifled home his 4th of the year, last night’s overtime hero would even the game at 2. Shots at the end 2nd were 31-17 Tigers.

The final period was a defensive chess match as the Oil Kings were looking to just get the game to overtime and the Tigers pressed for the win. Tristan Jarry stood on his head in the period stopped all 19 shots his way, while Marek Langhamer only had to face 4 but was sharp to keep the game tied.

Extra hockey was the theme this weekend for the Tigers as this game also went into overtime. The 4 on 4 session is one of the Tigers strong suits, matching their speed is hard to do. At the 2:14 mark of the 4th period, Matt Bradley would take a Ty Schultz pass and drive hard to the net, getting his own rebound he found the corner pocket along the ice to win it for the Tigers faithful.

The Tigers will have the week off until Friday when the boys will take on the Everett Silvertips as the Tigers start their United States roadtrip.

Next home game is December 12th against the Kelowna Rockets. The game also marks the Tigers annual Teddy Bear Toss, bring your teddy when the Tigers score! Call the Tigers box office at 403-527-8406 to get your tickets!