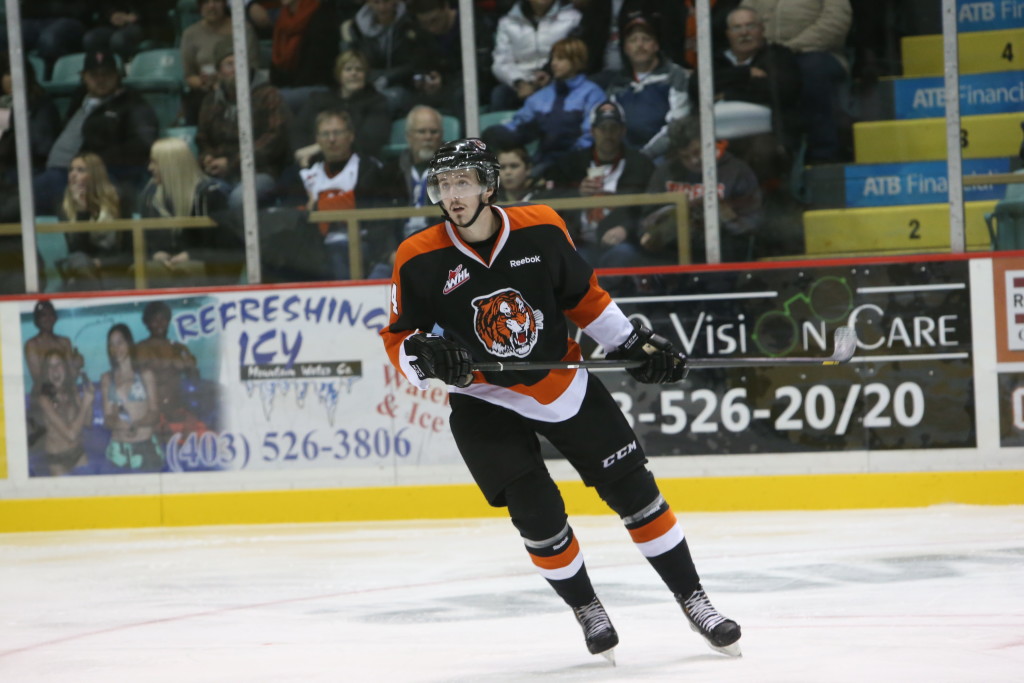 Medicine Hat, AB — The Tigers snapped their short 2 game losing streak on Tuesday when they defeated the Swift Current Broncos in a tight 2-1 game. Keeping that momentum was key coming into their Friday night tilt against Moose Jaw. The Warriors put up a good fight to the shorthanded Tigers, who dressed 16 skaters once again, however it was the Tigers who prevailed with the 2 points on this night.

The game started very early for the Tigers as a defensive breakdown down low was capitalized on by the Warriors and Jack Rodewald buried a pass from Brayden Point to put the home team up 1-0 just 51 seconds in. The Tigers would fall behind by 2 goals as former Tiger Spenser Jensen would find the back of the net on a screen shot from the point just 6 minutes later. The Tigers would carry the play throughout the period, but 2 mistakes put them down by 2 until leading scorer Cole Sanford would claw the Tigers closer as he scored with just 1 second left in the period. The Tigers would outshoot the Warriors 18-12 in the opening period.

The middle frame saw the Tigers put the pressure on the young defence core of the Warriors, however it was Moose Jaw who had four 2 on 1 opportunities in the period as the Tigers pressed for the equalizer. Marek Langhamer would be solid in the period, only seeing 5 shots in the frame, but all quality shots. Tommy Vannelli and his rocket of a shot would catch Warriors goaltender Zach Sawchenko off guard as he buried his 6th of the season over the blocker to pull the Tigers even at 2. The orange and black would continue to outshoot the Warriors 28-17 after 40 minutes.

The 3200+ fans in attendance at Mosaic Place were in for a great third period. Jack Rodewald would give the home team the lead just 2 minutes into the period as he and Brayden Point would connect again. Just 5 minutes later the Tigers would answer as Chad Butcher would find a loose puck at the side of the net after Kyle Becker drove hard to pot his 11th on the year. The remainder of the period would be the typical chess match as both teams looked to push this game to overtime.

The extra frame is an area where the Tigers excel, as they utilize their offensive minded defenceman and speedy forwards to take advantage of the 4 on 4 action. The biggest moment of the 4th period was a disallowed goal by the Warriors. Alexey Sleptsov took a slap shot which was deflected in front of the net by Tanner Eberle with a high stick. The referee would instantly call the goal off but the play was under review. The referee’s call would be confirmed, the goal was called off and play would continue. Finally with only 40 seconds left in the frame, Ty Stanton would break up a Warriors 2 on 1 and would spring Trevor Cox, who would find Stanton in transition driving the net for the game winner 4-3.

Three Stars of the Game

The Tigers are back in action tomorrow night against these same Warriors as they conclude the back half of a home and home, gametime is 7:30PM at The Arena, the final time the Warriors will travel to Medicine Hat this season.