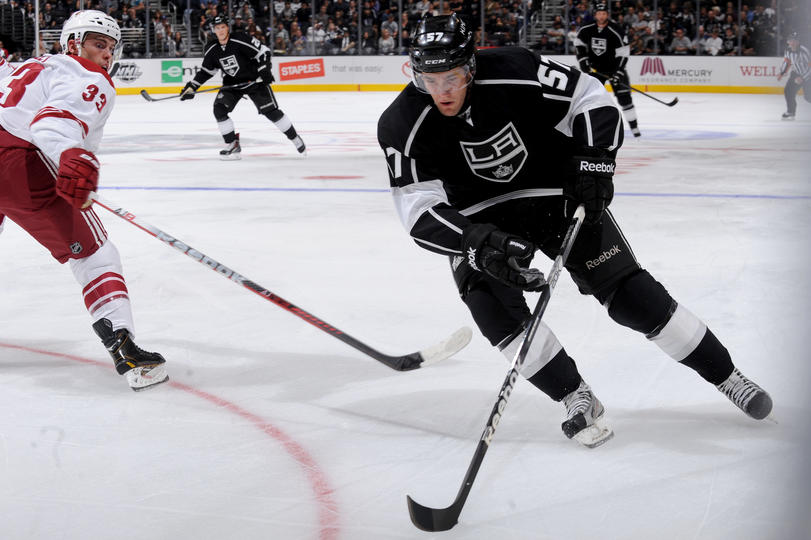 “His skill is right up there with any of these guys,” Muzzin said, waving toward a section of the team’s dressing room in El Segundo.

Rest assured, Muzzin wasn’t directing his arm at the mucker-and-grinder section. It was more like the Justin Williams–Jarret Stoll–Anze Kopitar wing.

The fascination of the latter stages of training camp is the speculation and anxiety amid the final cuts. Rosters are limited to 23 players. On Wednesday, the Kings whittled their number to 29, sending defenseman Derek Forbort and center Nick Shore to their American Hockey League affiliate in Manchester, N.H.

This means that Vey and his highly touted linemates, wingers Tanner Pearson and Tyler Toffoli, are still in camp with two preseason games remaining. The trio combined for 69 goals in Manchester last season, and the thought of the line’s connecting in the NHL is wildly intriguing.

For now, hold that thought.

The NHL contracts in camp — as well as the salary-cap considerations — suggest the kids will start the season in Manchester, barring a major surprise, and the words “youth movement” aren’t traditionally associated with Kings Coach Darryl Sutter.

Also, Kings General Manager Dean Lombardi bristles at the suggestion of hyping the youngsters. He takes almost a fatherly position. In fact, early in Lombardi’s tenure he was protective of former Kings goalie Jonathan Bernier, sending the then-19-year-old back to his junior team early on when the Kings were flailing in 2007.

Though the Kings 2013 have almost nothing in common with the Kings 2007, Lombardi’s core beliefs have not changed.

Lombardi, via email, made a baseball comparison earlier in camp when he was talking about the potential upside of Pearson-Vey-Toffoli.

“That whole line is like when [Ron] Cey, [Bill] Russell, [Davey] Lopes and [Steve] Garvey were all in the minors together,” Lombardi said of the storied Dodgers infielders.

Said Muzzin: “I remember last year playing with them and sometimes it was, ‘Wow.’ They just know something that other teams didn’t know. Once they got the system down, they had a feel for each other.”

Vey, who turned 22 in July, said the hope is that they can make the squad “one by one.” Drafted in the fourth round in 2009, he has had plenty of meetings with Lombardi.

“Obviously, there’s been some good ones and some bad ones over the last couple of years,” Vey said. “I know my first camp I didn’t come in the greatest of fitness. He sat me down and said, ‘Hey, this is the way things are going to go.'”

Vey turned it around, and a source of recent inspiration has been his 26-year-old brother, Shaun, who once played junior hockey for Tri-Cities in the Western Hockey League. The brothers played one game against each other when Linden, then 16, was just starting to make his name with Medicine Hat.

Now working for an agricultural company in Saskatchewan in Canada, Shaun received a diagnosis of testicular cancer in February but got a clean bill of health in the summer. “We grew up together and I learned a lot from him,” Linden said.

Said Shaun by phone: “He’s somebody I’ve leaned on and he’s leaned on me. Having him to follow in hockey helped me keep my mind off things. We’re four years apart, but we’ve been best friends for years.”

Linden, apparently, is his own toughest critic.

“He’s usually pretty honest about how he is playing,” Shaun said. “If anything, he’s a little bit hard on himself at times. If he tells me he’s played OK, I think he played good. If he says he played bad, he probably didn’t play as bad as he thinks.”